Taking that 2D example we gave earlier into 3D, we arrived at this. (The colored lines showing relationships between cones are optional.) 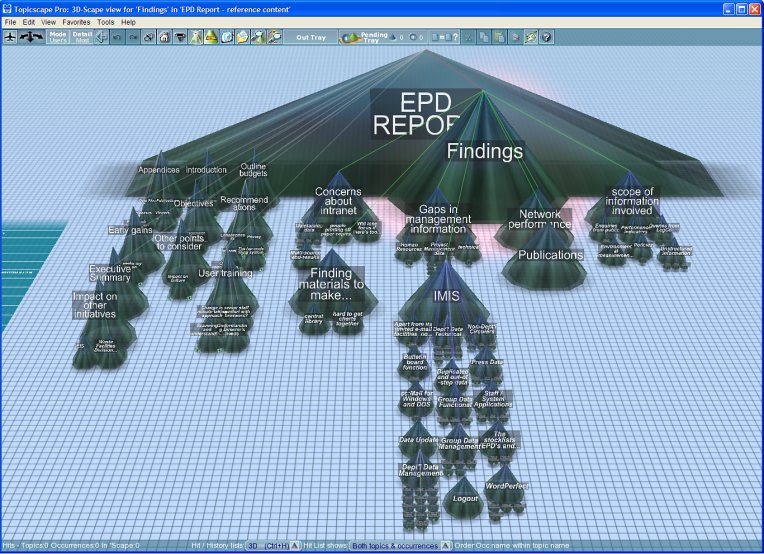 The project illustrated above was actually planned and managed with a 2D mind map because it was done pre-Topicscape but this shows how the nightmare of that 2D mindmap that we looked at before (the one shown as a thumbnail on the left) can be tamed by a move into a 3D Topicscape shown above, to illustrate the difference. The topic cone “Findings” is the focus of this view at present.  We refer to it as the Current Topic, but any topic can be made Current, and all the positions are adjusted to show the relationships.

As the purpose of this article is to recount an exploration in information management, not to provide a manual of Topicscape use, I won't describe this structure in detail here. You can click the image on the right for some illustrations explaining the Topicscape structure in detail if you want to know more.

I'll go on to look at organizing real information in Topicscape directly next, but first...

...a note on the terminology we settled on

Topics and Occurrences are terms from the topic maps standard.

Topics are nodes, and Occurrences, while they are often files containing information about the Topic in which they appear, may also be fileless in Topicscape.  They will be fileless if you decide just to add a note to a Topic.

Topics are linked by Associations (like relationships connecting ideas), and Associations may have Association Types, a descriptive phrase that defines how the topics are associated.

That's all very abstract and we can't leave it there, so let's get concrete: 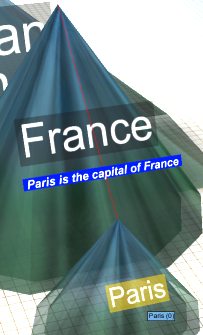 Example:  You have a topic Paris and another one France.  In the hierarchy, France is treated as the parent of Paris. There is an association connecting them.  It has an association type “is the capital of”.  So, as with concept maps, you can read off a some information from this “Paris is the capital of France”.  In the topic Paris you could have occurrences “Metro map.pdf”, “Historical timeline of Paris events.doc”, “Arrondisements.xls”.  In the topic France you might have occurrences “Map of departments.pdf”, “Départements d’outre-mer (DOM).xls”.

The above three occurrences will be seen by entering the cone "Paris" where you will see the Topic Center, above. That's done by hovering on the cone and clicking the red entry arrow that appears (there are other ways).

What do we expect an information manager to do? ⇒