So what's the best visual approach for information management?

It has been a long time since we held most of our information on paper. So:

Some 65% of people are visual learners.

This figure comes from https://www.studyingstyle.com/

If we accept that, it follows that more than half of people must therefore be visual thinkers. The proportion may be lower, but through designing Topicscape and an active interest in mindmapping generally, I know that school teachers and lecturers at tertiary level use visual ways of presenting information extensively. Mindmapping and concept mapping are highly favored in teaching circles.

My choice then, was mind mapping

Why did I choose mind mapping especially?

It's a technique I've used for over 30 years for idea generation, facilitating meetings, planning, and organizing projects. It is personal, individualistic and flexible and I feel very comfortable with it.

So what is mind mapping?

While this style of mapping is a good learning and creative thinking tool for many, and for visual thinkers a good motivator, it is unsuitable for managing information, I think you'll agree if you look at these two examples. 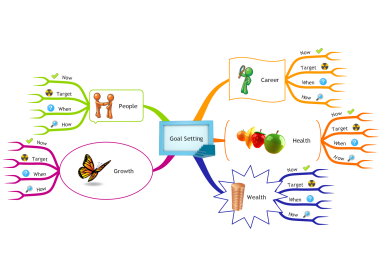 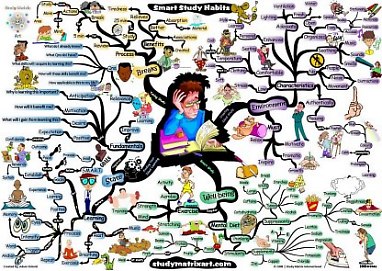 That on the left is from Buzan's own site. On the right, one of the talented Adam Sicinski's creative wonders.

Some people will be familiar with concept maps as a way of creating knowledge in Knowledge Management. This type of map is widely used in the American education system and others, for aiding and assessing comprehension of a new subject. For learning, it's my belief that they are more rigorous than mind maps. Here's an example from Massey University in New Zealand. 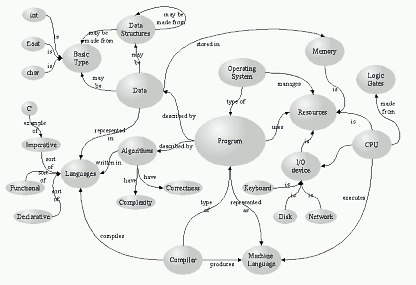 You can look at a concept map and judge whether it is correct or not because a concept map makes statements. Connecting phrases describe the relationships between concepts and that is how the statements arise. In the example here, for example, we can derive a statement "An Operating System is a type of Program" and we can agree, disagree, refine and argue about that. Mind maps do not have this feature, so it is a key differentiator.

As a result, a mind map is more personal - it shows how someone thinks things are connected, but all it says about those connections is which is “included in” which, or which is “the parent of” which.

But I don't think concept maps are that suitable for information management, because of the matter of hierarchy. Originally Novac, who introduced them, described them as hierarchical. But those who use them, long ago stopped requiring them to have a hierarchy. Here is an example that shows this particularly clearly: 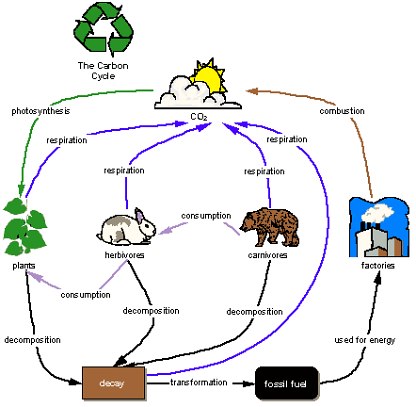 This was made with the concept mapping software “Inspiration” and is a sample from the Inspiration site. I'll be talking more about how a rigid tree diagram hierarchy gets in the way of managing information later, but some form of hierarchy is very useful in information organizers.

Moving on to how we can use mindmapping to organize computer files, web pages and notes, I'll look at MindManager because I think it's getting closer to what we need. This is mind mapping software I've used since I first found it in 1996 when it was called Mindman. 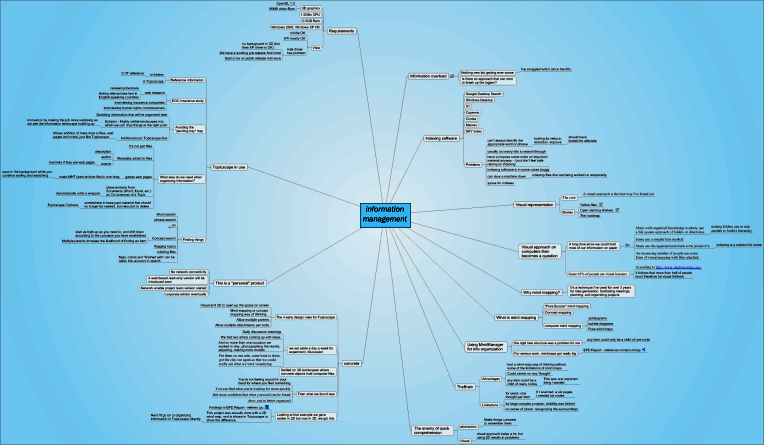 Some people refer to mind maps that do not follow Buzan's rules as “spidergrams” or “business maps.”

I'd heard of spidergrams before I bought Buzan's first mind maps book in 1974. They are much more practical for most business applications of mapping. Indeed this account of a personal journey was planned on the one above.

There are other terms for related (and in some cases identical) types of diagram: Bubble diagrams, idea maps, business maps and others.

The rigid tree structure was a problem for me

Any item could only be a child of only one node. You can have curly, dotted lines that break the hierarchy, but that doesn't let me link a node to two parents. Multiple parents are a hierarchy and are often needed in managing information, just as people would make photocopies of typed documents, one for the client file perhaps, one for the project manager and one for Accounts.

The problem was not hierarchy, it was the tree-diagram nature of mind maps where each node can have one node and one node only.

Next - a tool that was closer to my needs ⇒