The core of this article is that a visual approach is the best way I've found yet and I'd like to start with some of the experiences I've had that convince me that this is not just a personal quirk.

The story of the yellow files

... keeping on top of things — visually.

I had a boss once who when he joined the company had his secretary order boxes of transparent yellow files and a new, large conference table for his office. Instead of having the conference table in the open area with chairs around it, he had it placed behind his desk. Within a couple of days of that, it was covered in yellow files in neatly staggered lines, groupings and patterns.

He said this was how he kept on top of everything. The key was, everything was visible, all the time and groupings of files represented goupings of projects and tasks. It really worked.

I never found out why the files had to be yellow.

The case of the open slanting shelves

Another case: I had a client with an open slanted shelves that ran along the front of her window. She used this as a sort of tickler system.

Again each slanted partition had transparent files in it, and they were all visible and very easily accessible. It was easy to see what was going on at a glance.

It took up a lot less space than a conference table, but at the same time it didn't give so much opportunity to cluster things according to their connection to each other.

The clincher: the visual 'roadmap'

The final story illustrating the impact of working with visual representations, comes from a job I had at one time.

I worked with an international client to pull together a visualization of all its many computer applications spread around the Asia Pacific region to show how they were linked and what depended on what. It was a large diagram with a database holding the essential information in the background. It was intended as a position statement only, to support future planning with the database being key information, and the diagram as a quick overview.

I mention this to show that, to many people, a visual representation is compelling: The visual element turned out to be something that kept the project alive long after the original intended few months. 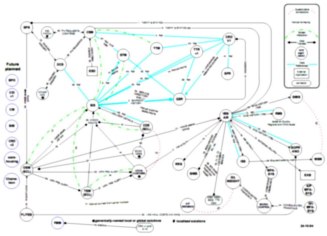 I started the information-gathering and analysis in 1993 and delivered this in 1994:

I did a couple of updates, then it was taken over by the client internally and by 1996 had grown to this: 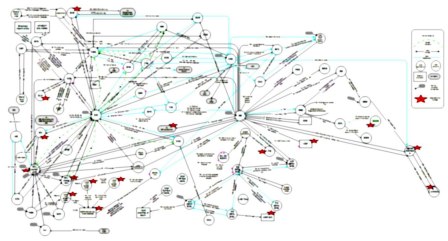 Later, on another project for the same client in 2004, I found it was still being maintained and used.  It came in handy again, this time with a global scope. So this visual representation, originally conceived to be temporary, was sticky enough to last for at least 11 years in Asia Pacific.

I learned that it has since become a permanent way of tracking computer applications in Europe. Later was dropped in Asia Pacific.