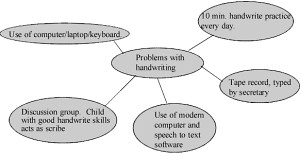 A bubble diagram (sometimes called a bubble chart, spray diagram) is a type of map where nodes are circles, ellipses, rectangles and occasionally other shapes. They often have a limited hierarchy showing bubbles just one level away from the central concept.

Bubble diagrams are most often centered round one concept, like mind maps, but they may deal with two concepts and therefore have two ‘centers’. They can then be used to compare and contrast concepts, and identify the common ground and the areas of difference.

The term spray diagram is used for something similar. These have one level of bubbles, and sometimes additional levels indicated by lines radiating out from the bubbles.

Diagrams used in landscape and layout planning are also called bubble diagrams. Sometimes the term is used to describe something having more in common with a concept map.