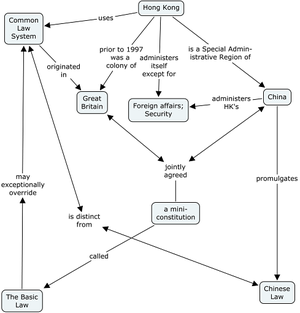 A concept map is a way of capturing understanding of a topic on a computer screen or on paper, in a way that shows how concepts are related and helps its users visualize knowledge.

A concept map lets the person or group making it see whether they have understood all the parts of the topic being mapped, and the nature of the relationship between the parts.

One use of concept maps is as a learning tool for individuals acquiring understanding of a subject from outside sources. Concept maps support teachers and tutors in seeing the level of understanding that a student has achieved.

They are also used as a method of capturing, realizing or formalizing knowledge. A group may have the knowledge in their heads but may never have defined it formally. Working together, members of the group can build a concept map by consensus, or can at least see clearly where points of disagreement exist that need to be resolved.

Concept maps can be a great help in viewing a subject and absorbing it quickly.

Uses of the term “concept map”[edit]

Some people use the term concept map for any web that is not bound to the limitations of a strict hierarchy. This implies that any node/concept may potentially connect to any other node.

Others stress the importance of relationships between concepts, and the linking phrases describing the relationship. Novak, the originator (with others) of concept maps, included this requirement at an early stage when developing this way of visualising knowledge.

The example above meets both these criteria.

A concept map will always be about a knowledge domain. In the case of the example here, “Hong Kong Law”, the three units, concept; linking phrase; concept, can be read as a proposition. For example:

This may not be an elegant statement but it is meaningful.

Concept mapping is used in schools and colleges (particularly in the USA) and by the Knowledge Management community.

Uses in knowledge management: Concept maps are used in capturing expertise in knowledge-based enterprises. The ability to extract propositions like the example just given means that those involved can agree, or disagreement can be spotted and discussed.

How to recognize a concept map[edit]

If some of the nodes on a map have multiple parents, it is likely to be a type of concept map. In the example above, the concept “a mini-constitution” has two parents: China and Great Britain, and it is linked to both of these by the phrase “jointly agreed”.

If there is a phrase across the relationship line joining two nodes, it’s likely to be a concept map. For example, “uses” between Hong Kong and Common Law system.

In concept maps, nodes are usually boxes, but this is not a defining feature.

Deciding when to use a concept map[edit]

Concept maps are most useful when visualizing knowledge:

An important benefit is that they can be evaluated for correctness. While you may not be able to guarantee that a concept map is complete, by evaluating each proposition, you will be able to say (or at least argue about) whether the map is correct or not.

This type of map is not so useful when organizing information, brainstorming new ideas, managing projects or a task list, or organizing meetings, to give a few counter examples. Other map types would be more appropriate for these pragmatic map designs.

The various types of map are discussed, with examples, in Information map types.

More detail of the comparison is given in Concept maps or mind maps? the choice, where the advantages of each map type are discussed and compared.

How to make a concept map[edit]

There is a separate article on this topic, covering concept maps in various circumstances: >> More …

Other uses of the term[edit]

In town planning, the term ‘concept map’ is often used for a geographical map that reflects a proposed change to street layouts, parks, pedestrian areas and the like. These are presented as conceptual plans for discussion. They are unrelated to the type of concept map relating to learning, knowledge and information.