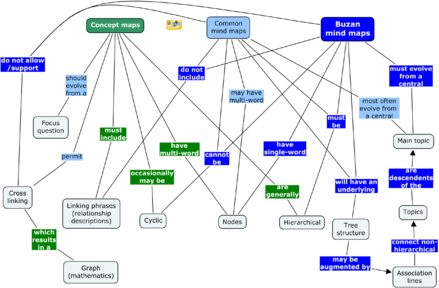 What are the differences between mind maps and concept maps? (click to see larger)

Sometimes you will have no choice. In an educational setting, some educators require their students to make concept maps, others mandate mind maps.

But most of the time we are free to choose. Then, the key determinants of when you would use each type of map will usually be these:

If you have elected to use mind maps, you still have a choice between Buzan mind maps and common mind maps in their various forms.

This article is not about which type is ‘better’. It discusses the benefits of each, and appropriate times to use the different types. 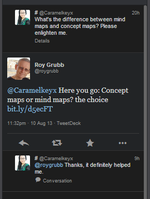 Appreciation for this article

Like most generalizations this is a simplification, but it captures the essential differences, as described in more detail below. It encapsulates the philosophy of WikIT, that no type of map is “right” and no set of rules works all the time.

What is important is to know when it’s appropriate to use which, and how. We hope all who contributed material to WikIT will have made it easy for you to decide.

Concept maps can be … precise and verifiable[edit] 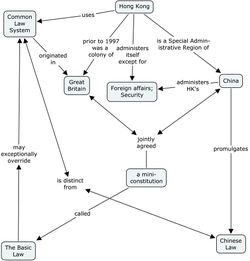 A simple example of a concept map

Novak[1], the leading figure in the development of concept maps and research into their effectiveness, has given this clear description:

“Concept maps are graphical tools for organizing and representing knowledge. They include concepts, usually enclosed in circles or boxes of some type, and relationships between concepts indicated by a connecting line linking two concepts. Words on the line, referred to as linking words or linking phrases, specify the relationship between the two concepts.”

“Another important characteristic of concept maps is the inclusion of cross-links.”

“There are two features of concept maps that are important in the facilitation of creative thinking: the hierarchical structure that is represented in a good map and the ability to search for and characterize new cross links.”

A concept map should start with a focus question, according to Novak. The map that heads this article aims to answer the question “What are the differences between concept maps and mind maps?”

If you are setting out to absorb knowledge, or convince a teacher, tutor or professor (or even yourself) that you understand a topic, a concept map is a natural choice. The concept / relational phrase / concept set, like …

Hong Kong administers itself except for Foreign affairs and Security

… is a proposition that can be discussed or argued over. In principle, it is verifiable.

A concept map is also a suitable medium for capturing tacit knowledge, and for the same reason: The accuracy or otherwise of each proposition can be evaluated and discussed.

The heading says “can be precise”, because of course there is no guarantee that they will be. It is possible to make concept maps that are incomplete, demonstrate limited understanding or are just downright wrong. This is one of the attributes that makes academics favor them as a teaching tool[3]. Another is that you cannot make a concept map of a subject unless you have a reasonable understanding of the subject. They support meaningful learning rather than learning by rote.

Concept maps are not limited by the element of rigor. Novak reports[1] that there “are two features of concept maps that are important in the facilitation of creative thinking: the hierarchical structure that is represented in a good map and the ability to search for and characterize new cross-links.”

(”Mind maps” here is taken to include spidergrams and bubble charts because the following comments generally apply to Buzan mind maps and common mind maps.)

Mind mapping is more flexible, and more personal than concept mapping. This observation is not intended to set mind maps above (or below) concept maps, but to differentiate the two types.

Mind maps are used to slice and dice the central concept in a large number of different ways, or explore branches out from the center. Concept maps are rarely suitable for that. Mind maps are expedient in nature, and are more likely to be judged ‘correct’ if the person using them finds them useful, rather than if someone else agrees with their content. Mind mappers strongly favor the use of images and color, a stimulating addition to the mapping activity.

If the audience is not limited to the author alone, then mind maps must be clear and logical, but if you make one just for yourself, to spark ideas say, you may be happy to throw it away at the end of the exercise. If you are satisfied with the ideas generated, the map is ‘correct’ no matter what others might have thought of it. 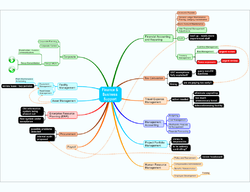 This case study is based on an examination of the Finance and Business Support function of a large corporation. We can imagine a consultant being called in to review the departments and units under this function. After the usual steps to define the objectives, scope and approach of the project the consultant had a scope mind map outlining the functions covered by Finance and Business Support. This was not an organization chart because it focused entirely on business requirements, not department or job titles. The organization chart provided useful clues, but discussion with the project sponsors was the principal source. During those discussions, the consultant had noted specific issues mentioned and added them to the mind map in easy-to-spot black.

The first phase of the project proper began with discussions with interested parties at a level subordinate to the project sponsors, but still senior managers. The main reason for these meetings was to meet the parties involved, and learn their concerns. The items were placed under the appropriate business function in the mind map – still black, to provide a visual clue to areas needing study.

As the study and gathering of information continues, the map was built up. The black nodes were gradually replaced with detailed findings about the issues raised, and sometimes the nodes with new information on them was relocated, as understanding of the issues grew and solutions were discussed and investigated.

For this type of use, the principal need is to record information and categorize it in an appropriate way. The ability to move items around, attach them to nodes is invaluable in the context of business study. The categorization invariably changes as understanding of the needs and way of operating of the business grows.

It turns out that following the Buzan guidelines rarely works well for this type of map (referred to on WikIT as a common mind map). See the a later section.

It also happens that mind maps for significant projects quickly become too large for convenient handling. That will be true for mind maps and concept maps though, so is not likely to be a factor in your choice of the type of map to use. See large mind maps for more about this.

In the example discussed above, the consultant chose to use a common mind map. In case you are faced with such a choice and haven’t formed your own preferences yet, you can find a comparison of the benefits of common mind maps and Buzan mind maps in the Common mind maps article. If you are looking for a more detailed article about the Buzan guidelines, Buzan’s mind map guidelines in practical use may be what you want.

The information map type you make and the guidelines you follow should be influenced by the reasons for building the map and the use you’ll make of it, not by what someone tells you that you should do. The purpose of WikIT is to provide information so that you can make choices, not tell newcomers to this field what to do or think.