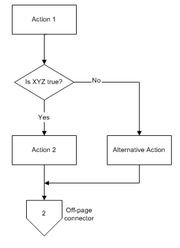 You may need no more than this brief and witty introduction.

Flowcharts in their simplest form are diagrams where boxes represent actions, diamond shapes represent decisions, and lines connect the boxes and diamonds to show the flow of processing. The diamonds have one entry point and two exits, with condition labels on the exit points.

They also use connector and labeling symbols.

Computer flowcharts use additional symbols to show, for example, storage access, screen display, procedures, sub-routines and printing. Other diagrams used in software engineering have been adopted since the 1990s (such as The Unified Modeling Language – UML) and flowcharts are less used now.

They are easy to use and remain suitable for some tasks where procedures and processes are to be described. 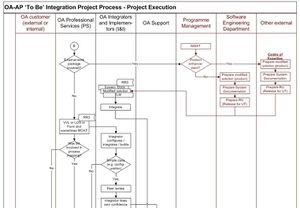 Also known as Cross-functional diagrams, these are flow charts where location, business function or business unit responsible for carrying out parts of a process are also shown.