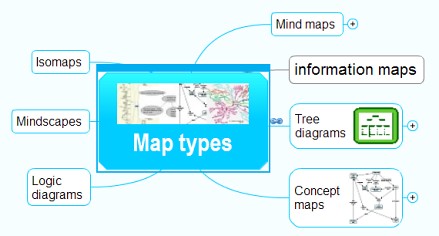 This is a brief overview of information map types. Each map type has its own more comprehensive section, linked from the entries below.

Alternatively you can navigate by a full version of the mind map on the right: The two links below open an active mind map in a separate browser window. This map has hyperlinks to other parts of WikIT, and expanding branches.

Mind maps have a main topic, which is generally placed centrally. All sub-topics, sub-sub-topics etc., radiate out from that main topic. The underlying structure is strictly hiearchical, though connection lines can be used to suggest associations between topics other than parent / child.

Tony Buzan appears to have been the first person to use the term “Mind maps” in association with the type of diagram that shows how topics are broken down and give guidelines for the making of “Mind maps” (Talk). The Buzan Organization registered “Mind Maps” as a trademark in the UK and US, but only in the specific context of organizing courses[1]. WikIT deems it fair to call these ‘true’ mind maps.

Earlier work on concept maps by Novak and Quillian is sometimes quoted as being the true origin of mind maps, but there are differences in how concept maps and mind maps are used and the benefits of each. WikIT seeks to explain these differences and show how you can take advantage of the differences.

To avoid ambiguity, the convention on WikIT is to refer to mind maps that follow the Buzan guidelines as “Buzan mind maps”. 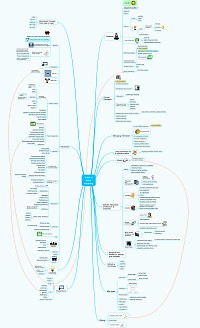 A mind map according to common usage (≈spidergram)

Common mind maps refers to the looser use of the term that is commonly encountered. It would often equate with terms such as business maps, visual maps, idea maps, information maps, spidergrams, spider diagrams and bubble diagrams.

Spidergrams, spider diagrams and spider maps are similar in structure to mind maps as the term is commonly used.

There is another use of the term ‘spider diagram’ that relates to an extension of Eulter diagrams. This is not dealt with in WikIT.

A bubble diagram is a type of map where the text appears in nodes that are circles, ellipses, rectangles or other shapes.

“Bubble diagram” is used in other contexts: Diagrams used in landscape planning 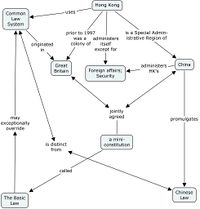 Two characteristics of concept maps are that anything can connect to anything and relationships are not just given as lines, but are described. Several WikIT articles deal with concept maps:

Mindscapes are unlike mind maps in several ways, but they share attributes like color, images, free layout, and organic or natural feel, which together are aimed at inspiring creative thinking and assisting memory.

The term appears to have been used first by Nancy Margulies, who facilitates creative thinking sessions in major organizations and corporations, and encourages their use by students as well.

“For many learners, creating images can become a powerful tool for recording ideas and making meaning of what they hear in class. Rather than thwarting this impulse, we can build upon it. Systems for using color, images, drawings, cartoons and symbols as well as words and phrases for recording ideas are now used by many educators as well as business and community leaders. I will use the term “mindscape” here to refer to these. The same system works well for communicating ideas to others. The process encourages students to be aware of the meaning of what they are recording as well as the relationships among ideas.”
Nancy Margulies

There are many diagrams that fall under the broad heading of “logic diagrams”, but most of these fall outside the category of information maps. Those felt relevant to WikIT include:

The following are excluded because they are outside the scope of WikIT (discuss): Diagrams for designing logic circuits; Binary decision diagrams; Caroll diagrams; Karnaugh maps/Veitch diagrams.

Tree diagrams can be used when a topic to be analyzed can be broken down into a rigid hierarchy. The example given on the right is an analysis of business domains in a large organization. It was built as a strategic support for the subsequent modelling of information systems.

This is not an organization chart and does not set out to show how a company is organized, or its reporting lines.

~Organigrams or organization charts are often examples of tree diagrams, though when one person answers to two supervisors, or when dotted lines are included to show informal but important communication, the organigram will be an imperfect tree structure.

Other map and diagram types[edit]

Exploratree has a set of thinking guides. At their web site is a free web resource where you can use interactive thinking guides, print them, edit them or make your own. You can share them and work on them in groups. It is aimed at schools and students, but has ideas for thinkers of all ages.

The article Visual thinking guides has more information about this, with links to the many interesting parts of Exploratree.

Here are some of the overall categories, names of individual diagram types and and indication of their purposes.

Different perspectives: From a different angle; Thinking boxes; Plus, minus, interesting; Compass rose.

Sometimes you will have no choice about the type of map to use. In an educational setting, some educators require their students to make concept maps, others mandate mind maps.

But if you are free to choose, consider the factors that will affect the success of your mapping set out in Concept maps or mind maps? the choice.

Here is a summary article on mind mapping styles.