Mind mapping on the run

The most mobile form of mind mapping is paper and markers, but many mobile devices now support mind mapping and most provide some import and export capabilities that allow you to send your mind maps to a PC for further thought, expansion and printing later. 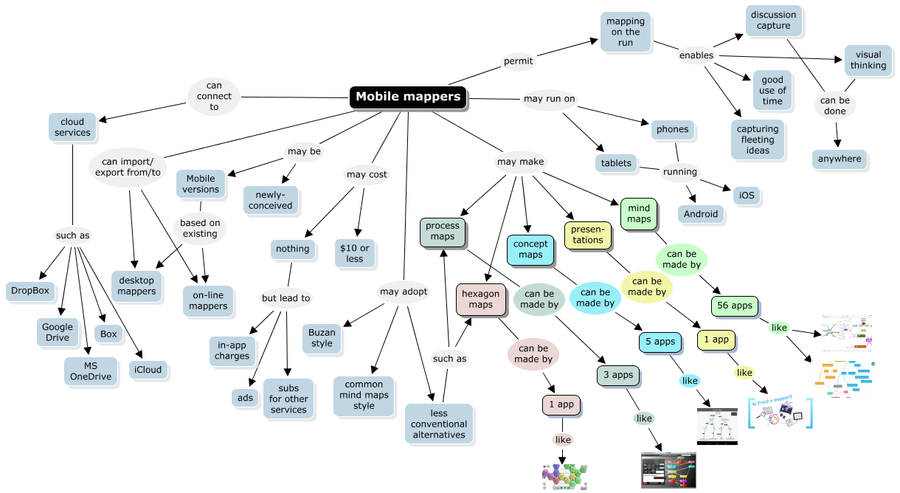 This piece first went online in early 2010 and plenty has changed since then. The field now deserves a comprehensive look as more and more of us do at least some of our mapping ‘on the run’ so this is a total re-write.

Here then is an almost complete view* across the apps that can make mind maps and concept maps on iPhones, iPads and Android devices. You may be as surprised as I was at just how many there are in Google Play and the Apple iTunes App Store.

The entries quote each publisher with an extract from the apps iTunes or Google Play page for the app. Most have some personal observations – some drawn from experience, others by looking at available on-line information.

There are two sections here – Personal Faves and the Mobile Master List. If you already use a desktop mapper, you’ll probably want to find a mobile version of the same software. Personal Faves is the best place to start in that case. Or – if the publisher of your desktop software has not produced a mobile version – you’d best look for an app that can import and export files in a format that your existing software can read. The most popular formats for inter-operation between different mapping tools are FreeMind, MindManager and Xmind.

Here, you’ll find mostly the well-established mappers that already have desktop or online versions and have added a mobile app to their stable. A couple, iThoughts and SimpleMind, went the other way: Mobile version first and desktop later.

If you’re looking for a quick choice, I don’t think you’ll go far wrong with any of these in Personal Faves. Some, like Popplet, Pearltrees, Lucidchart and Kidspiration have more specialized uses and you’ll need to be sure that they do what you want.

One long page wouldn’t work for the 60+ items in the Mobile Master List, plus all the Free/Lite/Pro variants, so the full list is broken down into 6 pages. Each entry has prices, applicable devices, my observations and an example map (click through for larger image). Click on the mapping tool’s name to see the entry corresponding at Mind-Mapping.Org. This shows iTunes or Google Play links, more details, and in some cases more sample maps.

The database at Mind-Mapping.Org has also been updated to reflect the many new tools I found when I was writing this. Some were there already, but 39 were not.

*Why not a complete list?[edit]

The first sentence of this article said “Here is an almost complete view across the apps…” Why “almost”? In fact there are seven others, but I didn’t include them and this is why:

I have not included names or links for these.

The seventh one was Maptini, which is in the Apple app store, but appears abandoned. Its four iPhone screenshot images are broken links, the Support link leads to a missing page and the last activity seems to have been in 2011, aimed at iOS 3.2.